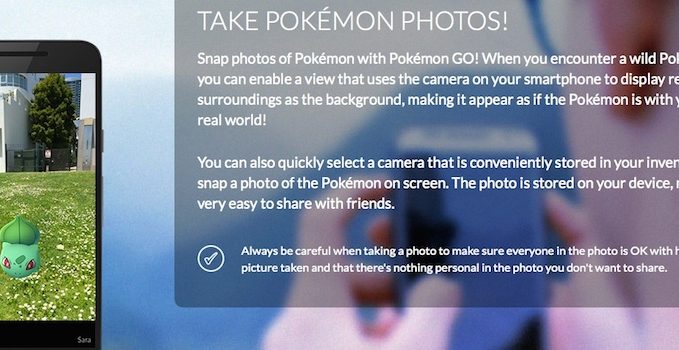 Much has already been said about Nintendo’s Pokemon Go, the augmented reality (AR) game that’s turned millions of Americans into manic scavenger hunters. Perhaps too much. The phenomenon has already triggered a backlash after just a few days from people tired of hearing about it. If there were a web-browser app that blocked all stories mentioning “Pokemon,” it would likely be as popular as the game itself.

But all this hype only underscores the game’s level of success — one that much more expensive ventures can only dream of. I’m sure somewhere in one of his secret fortresses, Mark Zuckerberg is loudly exhorting his minions to get off their butts and develop a Pokemon Go-sized hit to make his $2 billion virtual-reality business Oculus VR pay off NOW.

To Zuckerberg or anyone else thinking they can replicate Pokemon Go’s success, I share these six factors that helped drive it. Good luck integrating all six — after all, even Nintendo’s first attempt at an AR game fizzled.

1. Pokemon is a brand that’s already widely known and, more importantly, triggers nostalgia. No advertising necessary to create awareness or incite emotions. Starting with new characters, or even established ones that don’t evoke much passion, would likely require much more marketing.

2. The required technology is already in everyone’s pocket. With VR, you generally need an expensive headset ($600+) and a powerful computer to drive it. (I’m not talking the flimsy cardboard adaptors that make you gaze into a cellphone that’s under-powered for VR.) With Pokemon Go, all you need is a free app and a smartphone — which 2/3 of Americans (and almost all millennials) carry with them all the time. (Makes sense — Pokemon is made up of the words “pocket” and “monsters.”)

3. The experience integrates both social and gamification elements. First, it’s an experience, not just eye candy, like say a virtual tour of the Grand Canyon. Second, unlike most VR apps, which provide a solitary experience that has you tethered to a computer and gazing around like an inebriated bobblehead doll, Pokemon Go involves a contest with friends or even strangers. (Americans love turning anything into a competition.) And third, unlike typical multiplayer video games, this one has you leaving the house and interacting with the elements — which young urban residents also love to do.

4. The experience is publicly visible. Since the phenomenon takes place outdoors, others can witness it — including other consumers, the media, and flummoxed museum managers/store owners talking about players invading their spaces. The combination of visibility and controversy on a national basis just generated more buzz.

5. This story has a novelty factor. While AR has been around for years, with Google Glass eliciting mocking responses, there’s been scant coverage of other AR devices and apps, as VR gets touted as the next big thing. But Pokemon Go showed how most Americans are still just discovering AR, and the media likes reporting what’s new or close to new. The next AR game that mimics Pokemon Go will likely get just a fraction of this coverage.

6. The media needed an upbeat story in a very downbeat time. 2016 hasn’t been a good year for this country (any country) in general, with violence and political acrimony seemingly in the news 24/7, and the economy still making most people nervous. This particular week seemed to hit new lows for reasons we all know. To balance their coverage out, the media seeks out “feel good” stories, whether it’s the city of Cleveland finally winning a sports championship, or baby ducks being rescued on the freeway. Young people in a friendly feeding frenzy over cartoon characters couldn’t have come at a better time for news producers and editors.