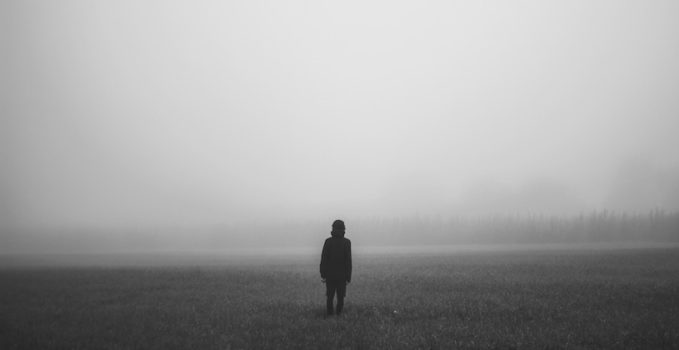 The Great Fog Bank: Remembering Why I Didn’t Major In Lit

by Freddy Tran Nager, Founder of Atomic Tango + College Grad Still Deciding What He Should Have Majored In; image credit – modification of photo by Jakub Kriz on Unsplash…

As much as I love reading and writing, I was just reminded how much I fear and loathe the study of it.

Decades ago in high school, I enjoyed discussing The Heart of Darkness and Grapes of Wrath, and hearing the myriad ways we teenagers misused the word “irony.”

Then I entered college and slammed into the GREAT FOG BANK OF PRETENTIOUSNESS, with essays so dense I didn’t read the words so much as chew them. The act of gnawing got in the way of knowing, and the best I could do was cough up what little I swallowed into thick, billowing essays of my own.

I recently relived that sensation while reading an article in Harvard’s alumni magazine. I won’t name the titles or people involved — my policy is to not slam individuals unless they’re trying to scam people. And while some say that academic pretentiousness is a scam at today’s tuition levels, in the age of Trump we’ve seen worse.

So instead, let me just share a couple of sentences that sent me running outside for fresh air (only to realize that I’m in L.A., so please send oxygen). Quote:

“The essay suggests the influence of [a certain writer], whose hallucinatory satires mine the absurdities of racism for comic effect, highlighting how their surreal and grotesque contortions are refracted in language and sublimated in collective phantasmagorias: television shows, music videos, and the movies.”

Then, just as I was beginning to digest that, I bit into this:

“[The author] has drawn just the opposite lesson, wagering that irony not only sustains the postmodern novel — but that it can even deepen the stain of allegory.”

Gee, there’s a new use of “irony” — wish I had known that one in high school.

So every now and then I wonder whether I should have majored in English. Or literature. Or some other non-business subject that would have brought me closer to writing the Great American Novel (my lifelong fantasy). Then I stumble across samples of academic discourse and remember that studying great writing somehow turns people into bad writers.