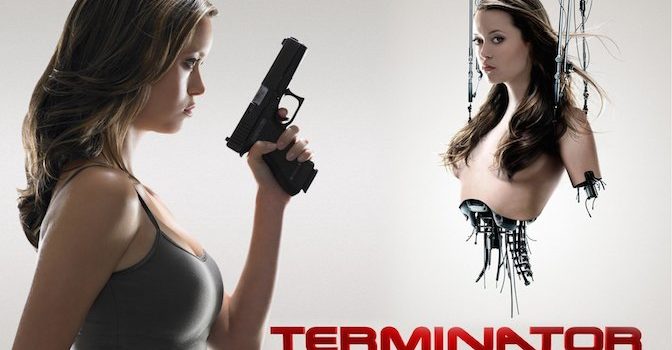 So Robotic: “The Terminator: The Sarah Conner Chronicles” In Review

by Freddy Tran Nager, Founder of Atomic Tango + Guy Who Wants His Fantasies to be Realistic…

The first season of Terminator: The Sarah Connor Chronicles wrapped up last week. T-tv did fulfill its mission of entertaining young males and, ahem, some middle-aged ones during Monday Night Football’s cruel hiatus. But my interest likely won’t survive the break… unless Fox keeps tweaking my interest by, say, releasing web-only shorts during the off-season. (Hint, hint.)

For all its special effects, visually appealing stars, and sci-fi adventure, T-tv is, frankly, dull. Great sci-fi series, such as the original Star Trek and the more recent Firefly, engage your brain as well as your viscera. But T-tv could have been written in Klingon for all that the story and dialogue matter.

Some of the episodes are, well, episodic, with side stories that don’t drive the main story forward. Like, what was up with the suicide girl?

It’s also doesn’t help a series when its most engaging character is a robot. Actress Summer Glau, playing an android, delivers the best deadpan American slang since Borat. The other characters are too earnest, as if nothing else matters in life but their mission. Hell, missions didn’t stop Captain Kirk from fooling around with the occasional alien chick.

Then there are the questions.

I’ll sidestep the logic conundrums that afflict all stories involving time travel — such as a person being in two places at the same time, or the fact that, if you can master time, you can always go back again and again and again to correct your mistakes in an endless loop. The movie Groundhog Day depicted that brilliantly and hilariously.

But here’s what else this sci-fi-watching nerd wants to know:

1. Why do the robots want to exterminate humans? Robots and humans don’t compete for resources, and the humans aren’t threatening the existence of robots. There’s no issue of religion, money, sex, ego or all the other silliness that compels humans to slaughter each other. So what’s the deal, tin men?

2. If their purpose is to destroy all humans, why are the robots keeping humans in concentration camps? In “The Matrix,” humans were kept as power supplies. In “Terminator,” humans are kept around as… décor?

3. Why are robots using physical weapons to hunt down humans one-by-one when biological and chemical weapons would be so much more effective? Bio weapons wouldn’t harm robots, who would have no moral qualms about using them. And they’d be easier to transport through time. If the robots can fashion flesh that mimics all human functions, why can’t they create a giant can of Raid?

4. Why are most of the resistance fighters in future L.A. played by white males? L.A. is already a “majority-minority” city (where less than 50% of the population is white) — what will it be in 2019? What happened to all the Asians? Wouldn’t the organized and heavily armed gangs of L.A. be more likely candidates to lead an underground resistance? And wouldn’t it make for a much more interesting story if the future of humanity lay in the hands of former gangbangers?

5. If protagonist Sarah Connor’s purpose is to protect her son, John, why does she enroll him in an L.A. public school? Is she expecting him to get an education there? Wouldn’t John be safer from detection (and getting mugged) if he were home-schooled? The original Terminator, Arnold, is now fighting for home-schooling rights — is that part of the problem?

6. John is depicted as a computer geek, so why is he not responding to the geek-fantasy-come-true of having a sexy babe-bot at his beck and call? He’s been running across space and time his entire life, so he’s never had a girlfriend, and now he’s 16: the kid’s libido should be about to explode. Yet he’s demonstrating all the passion of a droid. (Hey, George Lucas, I got a title for your next flick: “Star Wars VII: The Passion of the Droids.”)

Some of these questions apply to the original Terminator movies as well, but with the TV show, the writers have the opportunity to explore issues in depth — something that can’t be done in a 2-hour feature. Instead, T-tv gives us standard car chases and shoot-outs and other detritus of network television. Where’s the imagination, the curiosity, the fun? Perhaps the scripts are being churned out by machines, which would explain all the new episodes during the writer’s strike…

OMG, I figured it out: Fox CEO Rupert Murdoch is a robot bent on destroying our brains through vapid television! First, Fox News, and now Terminator! RUN!!!

That said, Fox did create a compelling ad campaign for the series. So while Fox can’t go back and repair this first season — time travel apparently being 11 years away — here’s hoping they can make the future a little more interesting.

Update 6/4/9: Josh Friedman, showrunner of Terminator: The Sarah Connor Chronicles, lets loose about his show’s recent, um, termination, including some fictional dialogue to sum up his feelings. Unfortunately, the nature of television meant that his show couldn’t be half as edgy and impassioned as his blog. (See Like Tears in Rain: How Sci-Fi Series Go All to Hell.)