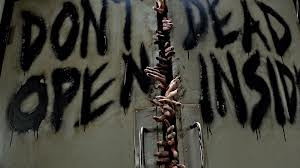 The Walking Dead: The Only Thing Missing Is Fear Itself

I love the adrenaline-fueled rush of a good scare… provided it’s pure fiction. (The Republican National Convention is too creepy to bear.)

My latest quest for chills is binge-watching The Walking Dead. And while I do find much of it entertaining, after just 1 1/2 seasons, I wonder whether it’s worth surviving, or whether I should opt out. Here are some issues that haunt me…

SPOILERS AHEAD: If you haven’t seen the series and intend to do so, stop reading here.

At least the creatives in Hollywood do, since most have apparently never experienced pure terror. In The Walking Dead, a handful of survivors stumble across the wreckage of civilization while their dead and decaying friends, relatives, and a few million strangers all try to eat them alive. Yet the humans act as if they’re facing nothing more than, say, packs of rabid hounds — even after seeing their companions devoured. Actually, if a dozen snarling pit bulls were to approach the cast and crew on the street, I bet there’d be a drastic difference in their behavior.

In The Walking Dead, you’ll find the humans sleeping in tents outdoors, wandering off on their own, having sex in the woods and in supposedly abandoned buildings, and letting their kids go on scouting and scavenging parties. Sorry, but when the characters can’t bother to be frightened, that just saps the scary from the show. Bring on the rabid dogs!

I think anyone making a horror show needs to experience pure terror first. They don’t have to live in Syrian warzones or stalk Bengal tigers in India, but at the least they should spend the night alone in a downtown alley or go for a solo midnight stroll across L.A.’s Griffith Park. They should record how they respond to every little noise and shadow and bring that to their multi-million-dollar productions.

Zombies supposedly have insatiable appetites — I’ve yet to see a scene in which a zombie pats his stomach from being full and wanders off belching. So when Hollywood depicts a zombie attack, we see the victims dismembered and eviscerated, with multiple zombies swarming until there’s almost nothing left. Yet you’ll notice that most of the zombies wandering the streets are largely intact, with only bite marks and a few parts missing.

Why weren’t the zombies originally eaten in their entirety? Do the vast majority of zombie victims get away after a single bite? Indeed, if the zombie virus depends on creating more able-bodied zombies (and not just undead body parts), why do zombies ever eat anyone down to the bone? Why not just chomp once and move on?

Vampires make more sense in this regard, since they just nip and sip, enabling them to feed and propagate at the same time.

It makes me wonder whether some humans taste better than others. Given that most of the attacking zombies appear to have once been fit adults (with only a few child and elderly zombies, and never any babies or obese undead), maybe healthy adults aren’t as tasty. All that muscle just makes them too chewy.

Or perhaps athletic humans can simply get away only partially eaten. But if only the strong “survive,” that should make the zombies better killers, with even fewer humans uneaten enough to become zombies. If all the NFL players became zombies, not too many humans would get away. They’d all be entirely devoured by undead middle linebackers. So for the sake of zombie species proliferation, the best zombie is actually a mediocre zombie — fit enough to attack, but not enough to kill. Or perhaps the ideal zombie is a picky eater and has a small appetite… beware the undead yoga instructors of West L.A.!

[Update 2/13/14: Apparently all the humans in the series are already infected with the zombie virus, whether they’ve been bitten or not. So no need for zombies to eat people to propagate the bug. Indeed, by eating people in their entirety, zombies are working against the interests of their own, um, species. Also, if everyone is already infected, why don’t zombies eat each other? They have no aversion to eating rotting carcasses; they just detest reanimated ones?]

In The Walking Dead, an adult male in peak physical condition gets shot, and despite top medical care in a modern hospital, falls into a coma for weeks.

In the very next season, a young child gets shot, and despite getting medical care from a retired veterinarian in a house with makeshift equipment, is up and playing within days.

That kind of internal inconsistency makes me groan louder than a herd of undead giving birth to porcupines.

Now, I hear what you’re saying: “Uh, Freddy, this is a TV show. Zombies don’t really exist. Why are you trying to find logic there?”

Putting the Real in Surreal

I happily suspend disbelief for the sake of enjoying monsters and ghosts and aliens, hobbits and dragons and wizards. But beyond their science-defying existence, I demand logic and realism to make the supernatural even scarier.

When I see a logic error or unrealistic human behavior, I “fall out” of a show. I stop seeing zombies and instead see actors and staged sets, and start trying to put myself in the heads of the show’s writers and directors.

Ultimately, I know that nitpickers like me are not The Walking Dead‘s target audience. Most American consumers eat up whatever television feeds them — the show’s monstrous ratings prove that. I just expect more from Hollywood creatives: while I love their immaculate production value and great character performances (Michael Rooker rocks!), what I really want is their brains.

P.S. Where are all the cats in post-apocalyptic America? According to this one furry blogger, our feline friends have nothing to fear from zombies.