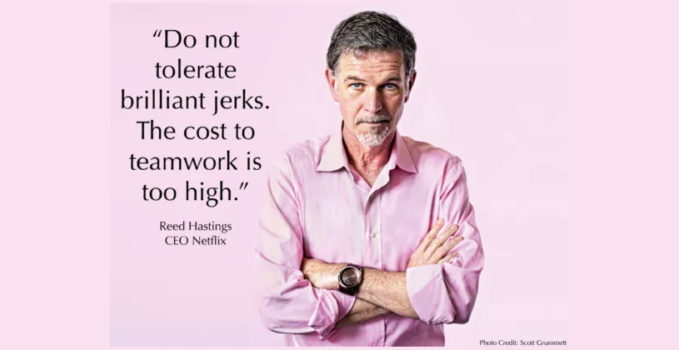 Brilliant Jerks? Bring ‘Em On! (And Why I Hate The Term “Team Player”)

LinkedIn’s wall is degenerating fast. It used to focus on careers and business discussions. Now it’s becoming Facebook, complete with inspirational quotes. For example, my LinkedIn wall frequently features this popular meme about Neflix CEO Reed Hastings, who has built a mighty empire. As a Netflix customer, I respect a lot of what Hastings has accomplished — but I don’t necessarily think his HR policies work for everyone. Case in point: his abhorrence of so-called “brilliant jerks.”

Now if a “brilliant jerk” is a bully who smells like cat food, harasses others, and doesn’t do his job, I fully agree with giving him the heave-ho. That’s not about “teamwork” — that’s about avoiding lawsuits and improving office hygiene.

If a brilliant jerk is someone who simply questions the answers and rejects the status quo, by all means, he should not only be kept, he should be rewarded.

Keep in mind that the opposite of a brilliant jerk is a mediocre team player, the person who nods in assent to everything. They’re useful for getting tedious jobs done, like filling out TPS reports. They can also be found easily — indeed, corporations are using outsourcing services in India where mediocre team players cost a lot less.

“There are very few men of genius in advertising agencies. But we need all we can find. Almost without exception they are disagreeable. Don’t destroy them. They lay golden eggs.”

Adds Wharton Professor Adam Grant, a corporation’s most valuable employees are “disagreeable givers.” His point is paraphrased here by Quartz:

“The agreeable giver may seem like the ideal employee, but Grant says their sunny disposition can make them averse to conflict and too eager to agree. Disagreeable givers, on the other hand, can be a pain in the ass, but valuable to an organization, Grant says. They’re more likely to fight for what they believe in, challenge the status quo, and push the organization to make painful but necessary changes, he says. And because they’re stingy with praise, when it’s offered, it generally can be trusted.”

In a seminal New York Times article from 2012, “The Rise of the New Groupthink,” researcher Susan Cain wrote about introverts and their need for solitude and quiet time. Not all smart people function well in teams. They just want to be given an assignment and left alone to get the job done:

“Research strongly suggests that people are more creative when they enjoy privacy and freedom from interruption. And the most spectacularly creative people in many fields are often introverted, according to studies by the psychologists Mihaly Csikszentmihalyi and Gregory Feist. They’re extroverted enough to exchange and advance ideas, but see themselves as independent and individualistic. They’re not joiners by nature.”

Guess what happens when you force these creative introverts into continuous teamwork — particularly with mediocre yes-men? Some withdraw even further. Others become (you guessed it) brilliant jerks. I see it when I assign students to work in teams. Some of the smartest minds don’t play that way.

Consider Apple (which Cain also cites): neither Steve Jobs nor Steve Wozniak was a team player. Jobs was a domineering extrovert. Wozniak was an eccentric introvert. Both could be classified as “brilliant jerks.” I guess Hastings would have fired both of them.

“Brilliant jerks” often become entrepreneurs because they can finally try things their way without being forced into teamwork. I can think of one such entrepreneur who Cain doesn’t mention in her article. Listen to him explain why he quit officer training school in the Marines:

“I found myself questioning how we packed our backpacks and how we made our beds… My questioning wasn’t particularly encouraged, and I realized I might be better off in the Peace Corps.”

Note that, with Netflix, Hastings has simply built a better vending machine. Whenever Netflix needs anything creative — whether it’s an original series or a fix for their recommendation engine — Hastings has to look outside his company. What type of people does he think creates all those Hollywood movies and TV shows?

In addition, that quote you see in the meme above is actually a paraphrase of one slide from Netflix’s Culture presentation. (See below.)

People sharing the “brilliant jerks” meme need to read the rest of this presentation. They’ll notice that while Netflix talks a lot about teamwork, it also places “Courage” as one of its top values, including the mandates, “You say what you think even if it is controversial” and “You question actions inconsistent with our values.”

A few slides later, the presentation notes that, “Sustained B-level performance, despite ‘A for effort’, generates a generous severance package.” Netflix wants “stars at every position.”

Netflix also expects “Innovation” from its workers, and abhors a “Process-focus [that] drives more talent out,” resulting in a company that “grinds painfully into irrelevance.”

So there you have it: not a simple aphorism in a meme, but a 126-slide presentation that says what Netflix wants. It’s not a prescription for anyone else (indeed, I can’t see most companies pulling this off, unless they also want to offer Netflix-level salaries and Netflix-level freedoms).

In short, Netflix wants only stars who are passionate and courageous and innovative and always do A-level work while abhorring process and questioning assumptions yet working as a team — otherwise they get fired.

Update 9/5/15: If you still think you’d like to work for Netflix, be sure to listen to this NPR report on Netflix culture, “Hard Work Is Irrelevant”…

Update 11/14/15: One of my colleagues on LinkedIn just wrote in response to the meme, “On my teams, I give the brilliant people license to ‘bother’ others. To tweak the old saw a bit: ‘The less brilliant need to follow or get out of the way.'” That makes sense to me. It also made me wonder how many brilliant people became “jerks” because they were forced to work on teams who were below their speed and standards. I’ve seen perfectly wonderful people lose their cool when forced to collaborate with the “less brilliant.”

Update 2/24/17: In the wake of all the scandals at Uber involving sexual harassment and other illegal behavior, I want to reiterate and underscore that I don’t consider such behavior to be the work of “brilliant jerks.” As I noted above, that’s the behavior of bullies who should absolutely be given the heave-ho. I have zero tolerance for bullying or harassment of any kind.