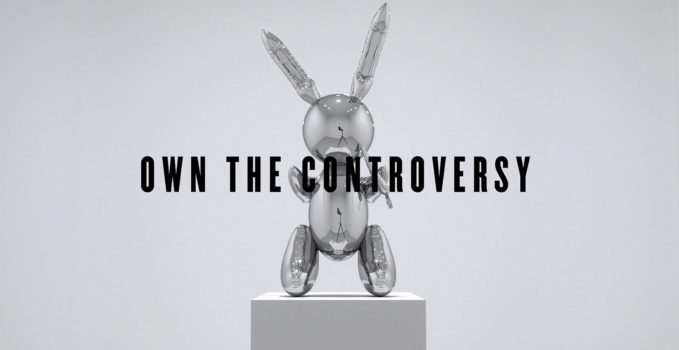 A Challenge To All Influencers: What Are You Fighting For?

The following is the text of a speech I gave May 23 at an Influencers Industry Social Mixer sponsored by Erka Media.

One of them, King Robert Mnuchin of House Goldman Sachs, coveted a giant metal rabbit, so he forked over 91 million in coin to acquire it. Soon he was posing for portraits with his prized possession.

The other, King Robert F. Smith of House Vista Equity, decided to liberate 400 young lords at Morehouse College of their scholarly debt. This would cost him 40 million in coin.

Yet even though King Mnuchin spent more than twice as much as King Smith, I think you know whose royal act was more influential. Not only did King Smith receive more acclaim — he was widely heralded throughout the realm — he had also implored the young lords to follow his example as they ventured forth throughout the land. His act will influence generations to come.

King Mnuchin’s act did not change minds or lives or behaviors — he simply scored a shiny new toy he could pose with — so despite the expense, his act did not have much influence at all. Unless, of course, you consider it a bad influence.

Now, I’m not against shiny new toys. I covet many myself and have built a career encouraging others to covet them. I’m also not against wealth. If I ever hope to own a house in Los Angeles, I’ll have to amass much more coin myself.

I would like to talk about how we use our influence.

Everyone in this room is an influencer, whether you’re a social media star with thousands and thousands of followers, or a teacher with a classroom full of inquiring students, or an executive with employees relying on your vision and direction, or a parent with a new generation seeking your guidance on every facet of their lives.

Indeed, when I ask my influencer marketing students who influences them the most, none of them has ever uttered the word “Kardashian,” but most have cited their parents. If you can ever figure out how to influence the vast majority of parents in the world, you’ll be the most influential of them all.

So we all have influence, and I hope we’ll all use it to do more than pose with shiny new toys. Because along with our influence, each of us has been granted a voice, along with people eager to hear it. And our world today needs all of us to use our voices.

As you know, we live in contentious times filled with trade wars, fragmented communities, environmental crises, and legions of demagogues trying to manipulate us with fake news and building walls to divide us.

Now I’m not saying we need to get political, to forsake materialism for spiritualism, or to devote our careers to charity. I hope you all succeed in your current ventures and pursuits. But as you do so, I hope you’ll bring more of yourself to the game. I hope you’ll pause to ask yourself:

“What am I fighting for?”

Again, I’m not saying get political.

Let me tell you about two other billionaires, both of whom started computer companies. One, Steve Jobs, sold shiny new toys, but in so doing, he fought for simplicity, creativity, ease of use, beautiful design, and bringing out the artist in all of us. The other, Michael Dell, prioritized low prices. So even though Steve Jobs is no longer with us, I would argue that he’s still far more influential.

So in however you express your influence, think about how you can instill your principles and values in your words, your imagery, and your actions.

If you are a beauty influencer, I hope you’ll redefine beauty with your values so that beauty is more than just how someone looks.

If you’re in marketing, I hope you’ll remember what values inspired you to get into this crazy business in the first place, and that you’ll share your inspiration with your clients, your employees, your collaborators, and ultimately your consumers.

And if you have children, I hope you’ll teach them values that will ensure that their children and their children’s children will have a healthy, peaceful world where they can pursue their own dreams.

So I admit, I think the giant metal rabbit is kind of cute. I would pose for a selfie with it. But I believe true influence is not measured by the sum of our possessions; it’s measured by the difference that we make. And if we fight for values and not just valuables, then we just might live happily ever after.