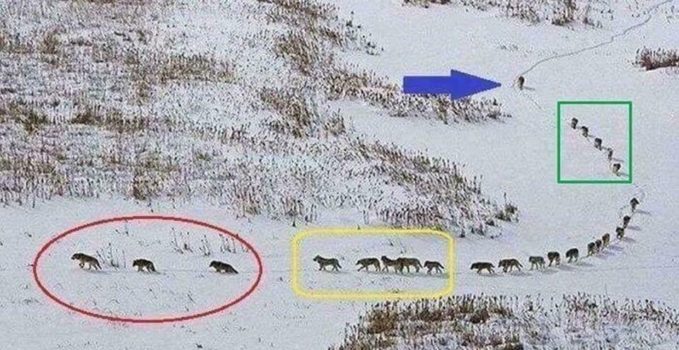 Here’s another doozy from the increasingly inane LinkedIn wall:

“A wolf pack: the first 3 are the old or sick, they give the pace to the entire pack. If it was the other way round, they would be left behind, losing contact with the pack. In case of an ambush they would be sacrificed. Then come 5 strong ones, the front line. In the center are the rest of the pack members, then the 5 strongest following. Last is alone, the alpha. He controls everything from the rear. In that position he can see everything, decide the direction. He sees all of the pack. The pack moves according to the elders pace and help each other, watch each other.”

Here’s the truth about the wolf pack image (via Snopes):

(In short, everything from the LinkedIn post is a pack o’ lies.)

And here’s my take:

This is a picture of animals upon which someone has drawn colorful shapes and images. These animals do not run corporations. They’ve never been in a corporation. They don’t know what a corporation is. So they can neither provide managerial advice, nor serve as a model for managerial behavior. And anyone who tries to draw managerial lessons from watching animals stroll through a park should not be trusted to lead a corporation. Because one day they might decide to change their role animal from wolves to something else, like lemurs or crabs or snow bunnies. All this photo proves is how easy it is to go viral if you spare people from having to think, and instead show them pictures of animals with colorful shapes and images

For all the criticism (most of it legit) that Facebook has become Fakebook, Mark Zuckerberg’s monster has at least been working on calling out fraud. When I shared this here article on Facebook, look what popped up beneath it on my friends’ walls:

And that’s a whole lot more than what LinkedIn does.