A Total Eclipse Of The Arts? Why It Matters And What We Can Do

by Freddy Tran Nager, Founder of Atomic Tango + Guy Whose Career Would be Nothing without the Arts… Since this website celebrates creative professionals, I would be remiss to not comment on the threat to the National Endowment of the Arts. Although its budget is relatively minuscule — a mere $148 million in 2016 compared to the $437 million budget for military marching bands (yes, really) and the overall $3.54 trillion federal budget— we can’t underestimate the positive impact of the arts. Randy Cohen, VP of Research and Policy atRead More 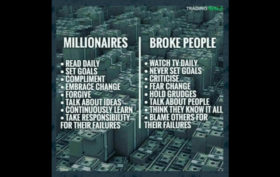 by Freddy Tran Nager, Founder of Atomic Tango + Critical Thinking Enthusiast… Please tell me the image above is just another annoying puzzle — one of those banal math problems or word games that clueless people play on LinkedIn to prove they’re “geniuses.” This particular LinkedIn challenge obviously shows the value of proofreading, and it’s so easy a Fox News host could solve it. The column headers are clearly reversed, so just swap ’em and the table makes perfect sense. In fact, anyone who’s ever worked for a blowhard HollywoodRead More