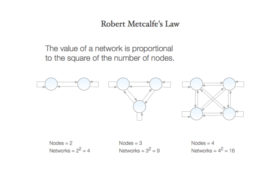 When Push Needs a Shove: How To Make Your Network Go Social Already

by Freddy Tran Nager, Founder of Atomic Tango + Part-Time Metcalfe’s Law Enforcer; image by Iriiina via Wikimedia Commons… OK, we get it: humans are social animals, and without positive interaction, we become Unabombers or maladjusted billionaires in David Fincher films (beware of alienated Harvard men). So while humanity desperately needs green energy and affordable healthcare and donuts that don’t make everyone look like the Michelin Man, those are so much harder to deliver. Helping people socialize — well, that’s easy, right?Read More

by Freddy J. Nager, Founder & Fusion Director, Atomic Tango LLC When I was a kid, the object of all crayon lust was the Crayola 64 box with the built-in sharpener, because a dull crayon was almost as bad as soggy Cocoa Pebbles. And yet, that Crayola 64 contained some bizarre colors like Maize, Burnt Sienna and the fun-to-say-but-rarely-used Raw Umber.* While Black was quickly worn to a stub — one could never have enough Black — Maize lasted longer than the Shredded Wheat that mom tried to get usRead More