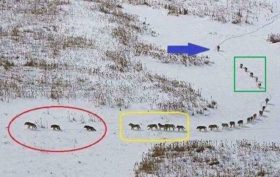 by Freddy Tran Nager, Founder of Atomic Tango + Animal Lover (Not Follower)… Here’s another doozy from the increasingly inane LinkedIn wall: “A wolf pack: the first 3 are the old or sick, they give the pace to the entire pack. If it was the other way round, they would be left behind, losing contact with the pack. In case of an ambush they would be sacrificed. Then come 5 strong ones, the front line. In the center are the rest of the pack members, then the 5 strongest following.Read More 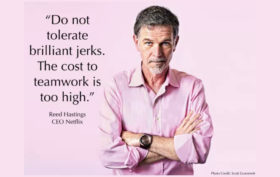 Brilliant Jerks? Bring ‘Em On! (And Why I Hate The Term “Team Player”)

by Freddy Tran Nager, Founder of Atomic Tango + Guy Who Sees Value In Brilliant Jerks; image credit: internet meme featuring photo by Scott Grummett for Wired Magazine… LinkedIn’s wall is degenerating fast. It used to focus on careers and business discussions. Now it’s becoming Facebook, complete with inspirational quotes. For example, my LinkedIn wall frequently features this popular meme about Neflix CEO Reed Hastings, who has built a mighty empire. As a Netflix customer, I respect a lot of what Hastings has accomplished — but I don’t necessarily thinkRead More