by Freddy J. Nager, Founder & Fusion Director, Atomic Tango LLC When I was a kid, the object of all crayon lust was the Crayola 64 box with the built-in sharpener, because a dull crayon was almost as bad as soggy Cocoa Pebbles. And yet, that Crayola 64 contained some bizarre colors like Maize, Burnt Sienna and the fun-to-say-but-rarely-used Raw Umber.* While Black was quickly worn to a stub — one could never have enough Black — Maize lasted longer than the Shredded Wheat that mom tried to get usRead More 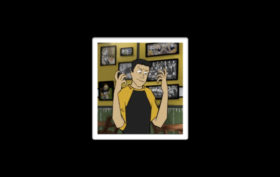 Where’s My Virtual Reality Beer? Hanging Out at SportsBLOX.com

by Freddy Tran Nager, Founder of Atomic Tango, Sportswriter + Steelers Bar Aficionado… So I’m hanging out at this bar, but no one is around — no bartender, no waitress, no other patrons, no one. Everything behind me looks fuzzy, but I have the power to change the way I look at the touch of a button… A bizarre burrito-induced dream? No, that’s the scenario at SportsBLOX, a new virtual world run by one of my former MBA classmates.Read More